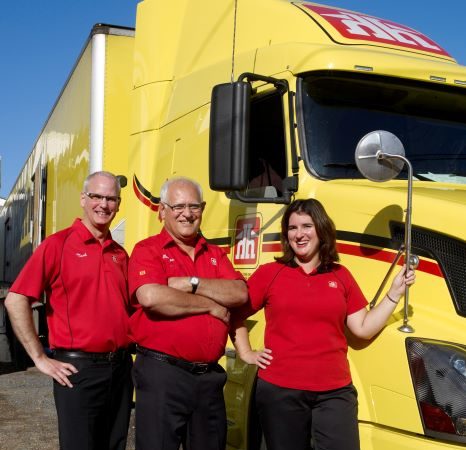 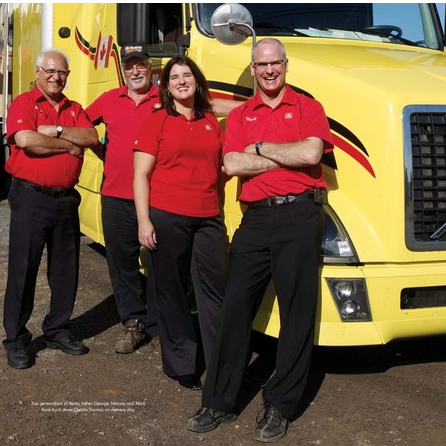 If we’re lucky, we still have a bit of the kid in us as adults.Which means that Mark Beck is a very lucky guy. On the surface, Mark is Mr. Home Hardware – third generation dealer, who worked at his father George’s store during summers; went to university, then worked for Home Hardware corporate, first as a merchandiser out of St. Jacobs then as Area Manager for New Brunswick and PEI; back to work at the store then purchased his own HBC down the road from the original family store. That’s the résumé 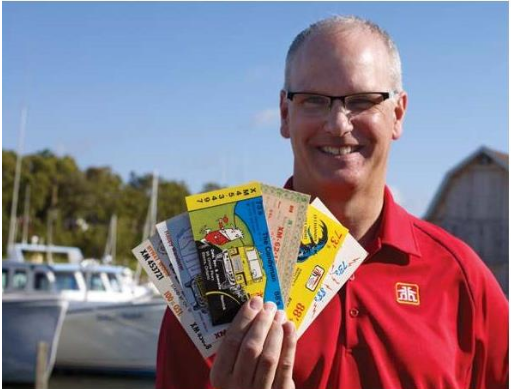 Montague is a quiet little town a half hour’s drive east of Charlottetown. In 1932, Cecil Beck and Ethan Stewart, Melody and Mark’s grandfather and great-uncle opened a general store. Their dad George joined the business in 1964. In those days, the “business” included a general store, a grocery store with a clothing department as well as hardware and seasonal ware all purchased from about a dozen different wholesalers. Walter Aylward visited in 1971 looking to grow the PEI store count from three. On his second visit,

To a small boy, the truck drivers were celebrities : they even had their own business cards the size of postcards that became instant collectibles.

But the little boy isn’t far below that successful surface. In fact, all it takes

is the arrival of the Home Hardware truck and he’s lit up like a top. When Mark was a little guy, one of the highlights of his life was the arrival of the Home Hardware truck. To a small boy, the truck drivers were celebrities – they even had their own business cards the size of postcards that became instant collectibles. (Mark still has a clutch of them that he guards jealously.)

The problem for young Mark was that the truck usually came in the evening. So if he wanted to be part of the unloading excitement and stay up past his bedtime, he had to have a nap in the afternoon. It was a small price to pay for the thrill of helping to unload the treasure trove from Home!

This childlike enthusiasm clearly runs in the family. Melody, who is seven years younger than Mark, came back to work at her dad’s store in 2010 after leaving nineteen years earlier to go to university. That was followed by career in conference planning for the federal Government that took her all over the country. She went back to school for her MBA then ran the PEI Business Women’s Association in Charlottetown.

She came back to work as the company controller because she was looking for a new challenge and her dad convinced her that this was where she would find it. He was definitely right. She is full of enthusiasm for the task at hand – whatever it might be. In the office is a ragged map with stickpins that allowed a proud father to track the many locations across the country that Mark and Melody visited in their professional peregrinations. But those days are over and the whole family is now home. And Home.

he brought along Walter Hachborn. George knew instantly that Walter was a very special person: he was sincere, friendly, knowledgeable and caring.He greeted the staff the same as the owners – everyone was equal. George knew that it was the opportunity of a lifetime to be part of an organization with Walter Hachborn as its leader. He applied immediately and in July 1972 became the fourth Home Hardware store in Prince Edward Island. To this day, he says it was the most important and best business decision he has ever made

In 2002 George and his brother Barry divided the company, with George keeping the hardware business and Barry moving the furniture business into a warehouse down the hill. This opened up an additional 7,000 square feet of retail space that has become their year-round seasonal department.

Like all small town dealers, the Becks play an active role in their community, supporting activities through donations, fundraising BBQs and countless causes supported by their staff members.  But one of the biggest community events isn’t a fundraiser. It’s the Becks’ annual Victoria Day clearance sale.

n the early 1980s, it was held in the arena then moved to a warehouse on the wharf, but for the past 10 years you will find everything happening in the store parking lot. But better get there early. People drive from all over the island, lining up hours in advance. When she was working in Ottawa, Melody would come home to work at the store that weekend. She remembers one year there was a 48-foot tractor-trailer filled with rolls ofwallpaper – 99 cents a roll and 80% sold out by the end of the day. Another year it was lawn mowers at half price. There were 100 customers for 23 mowers. Someone had to break up a fistfight over that!

Story from the book “At Home Across the Country: Celebrating 50 Years at Home Hardware.” Written by Holly Levine. Photos by Greg Fess.